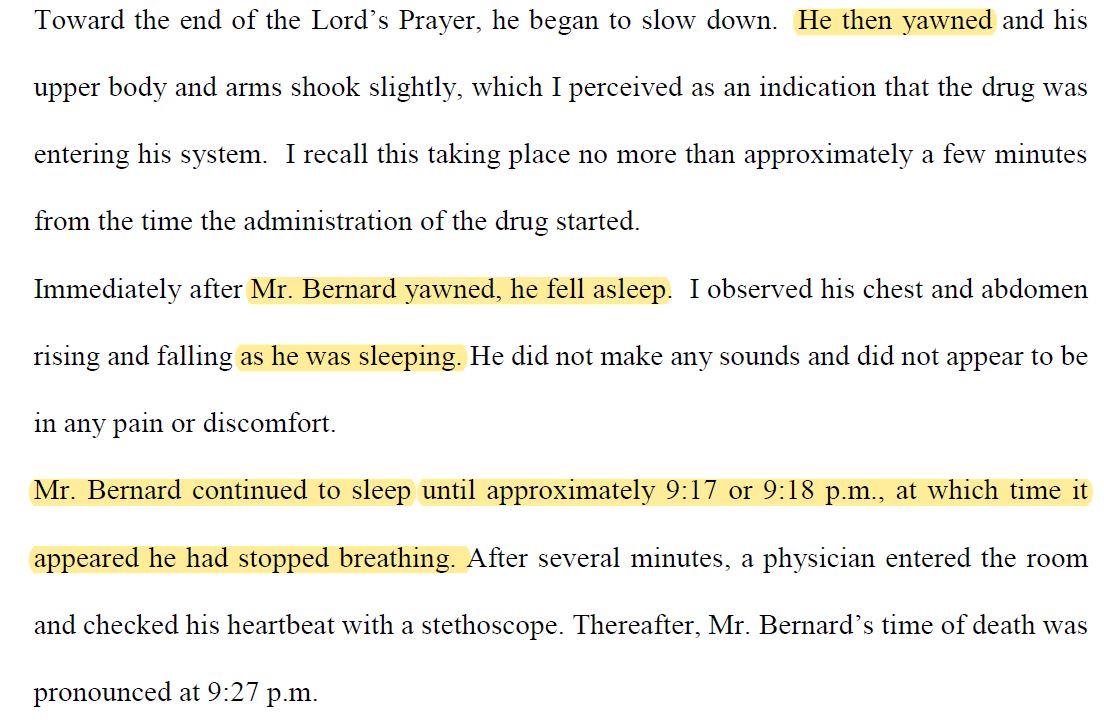 #Executioners used #sleep metaphors to describe the #executions of #BrandonBernard and others by lethal injection under #Trump, according to filings I found of their accounts. Gurneys are "beds," last breaths are "yawns" and "snores;" unconsciousness is "sleeping." #DeathPenalty

#brandonbernard was killed by this country for being present during violence. He didn’t pull the trigger, but we went ahead and murdered him anyway. These people aren’t even going to be charged with a crime!? No. Unacceptable.

Exclusive: Justice Department, FBI debate not charging some of the roughly 800 Capitol rioters in cases where no link seen to violence 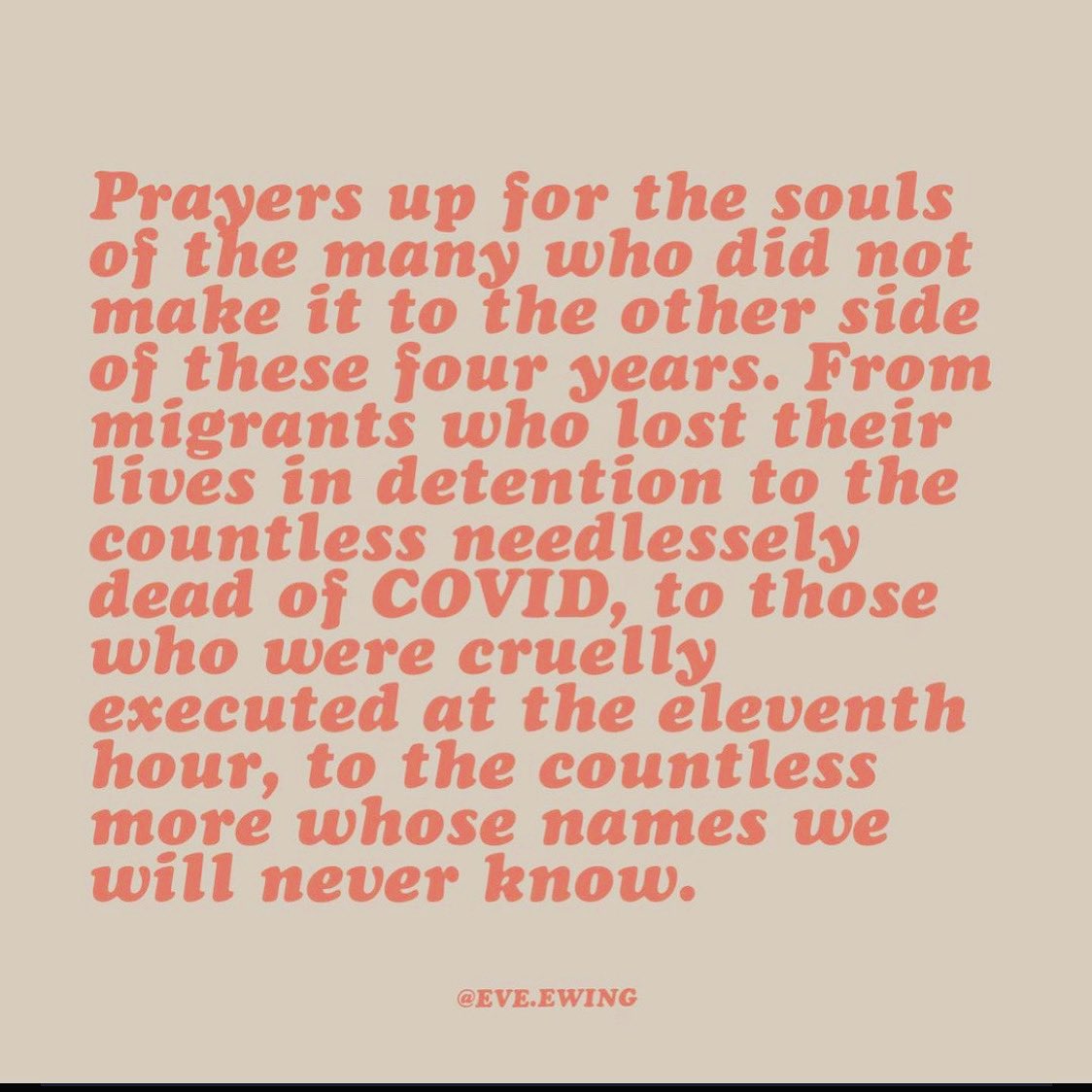 The senselessness of the executions is hard to put to words, says @LilianaSegura

Read her piece in @theintercept on the effects of executions on family members:

@USCCB @ArchbishopGomez Big pro-lifers are we?!?!?! Such hypocrites.

No mention of condemning: 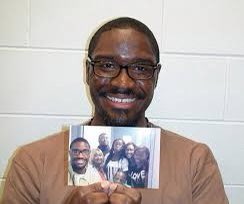 Seeing Lil Wayne be pardon because he’s rich and connected. While wrongly convicted/ changed black men & women rott and die. I just wanna say...I AM SO SORRY BRANDON BENARD! This is what a tale of two countries look like... #BrandonBernard 🙏🏾

but Trump really couldn’t pardon #brandonbernard ??? i’ll never get over it. ever. he should be here. he should be alive with his kids.

all these pardons yet #BrandonBernard couldn’t even get honored to eliminate his execution to serve the remaining sentence in prison!
🗣TRUMP YOU ARE TRASH 🗣
Rich privilege to it’s finest!

fck u trump , you pardoned a r@pist but couldn’t stop the execution of #BrandonBernard

As previously stated, the other 4 recent victims of the death penalty, #coreyjohnson, #LisaMontgomery, #DustinHiggs and #brandonbernard were failed by the system. We were too late to save them. I hope they all rest in peace.

BUT, WE DO HAVE TIME TO SAVE #rockymyers

But,
We still have time to save #PervisPayne. This man is another innocent black man scheduled to be executed. A brief summary of the situation:

Of course, after remaining silent in cruelty throughout 3 requests to stop federal #executions last week & #brandonbernard too despite over 500k pleas in last 3 hrs of his life
Pretty sure he hasn't had a heart attack yet, it's been cold & dead a longtime 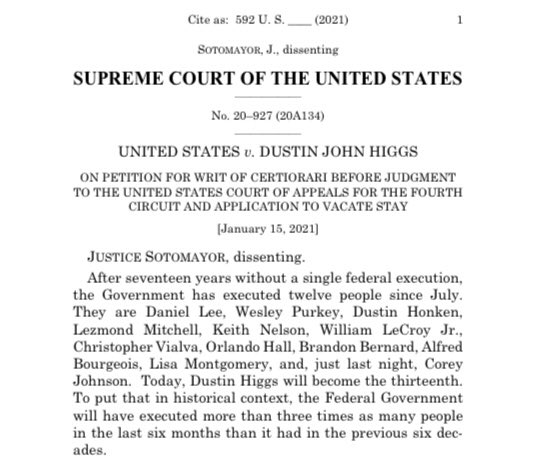 Haste over humanity.
Retribution rather than redemption.
Condemnation instead of compassion.

So when #DustinHiggs supposedly "forced" someone to kill those women, we all rally behind the actual murderer but when #BrandonBernard was literally going to be killed if he didn't set that fire, we don't give a shit? #doublestandards and excuses to kill black people #BLM 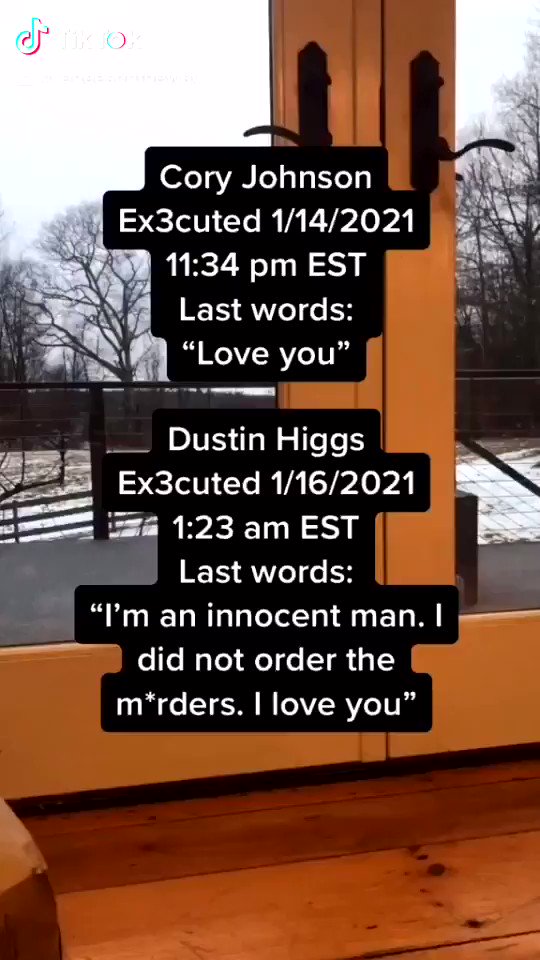 Apply pressure against injustice.
We have to end the death penalty.
I’ve never seen an administration so adamant in executing more lives than any administration ever in 60 years and..... in the middle of a pandemic
#DustinHiggs #CoreyJohnson #BrandonBernard

🙏🏻 Dustin is in Heaven with Jesus now & so is
#BrandonBernard
#AlfredBourgeois
#LisaMontgomery
#CoreyJohnson
Pray for the new victims the #DeathPenalty just created.
Murder is not Justice whether it's legal or not

Our full story on #DustinHiggs, with my account witnessing his execution early Saturday morning. As the lethal injection entered his veins, I could hear loud, inconsolable sobbing coming from a witness room reserved for his family. #Trump #DeathPenalty

A heavy but important read. We must #AbolishTheDeathPenalty and resoundingly join with Justice Sotomayor to say “This is not justice.” We mourn the lives of those executed by our government #DustinHiggs #LisaMontgomery #CoreyJohnson #AlfredBourgeois #BrandonBernard and 8 others.

I’m sorry Dustin Higgs, Cory Johnson , and Brandon Bernard🥺🤍
#BrandonBernard #DustinHiggs #CoreyJohnson I’m so sorry the system is completely fucked up! Let’s be real these white folks out her shooting schools up and “it’s mental health” my ass😒

He is the 13th person executed since July.

Trump has now overseen more federal executions than any president in more than 120 years.

But all lives matter.

There is much to be said about the evils of Trump and his administration.

But I hope history remembers the blood on their hands from restarting the federal death penalty after 17 years and executing 13 people in just 7 months. More than the last 56 years combined.

These are the names of the people who lost their lives because of #BrandonBernard #CoreyJohnson #DustinHiggs and #LisaMontgomery. Remember the victims and not the criminals.

#BrandonBernard, #CoreyJohnson, #DustinHiggs and #LisaMontgomery all got what they deserved. 12 people died as a result of their actions. They don't deserve any sympathy. The families of the victims do. Stop making criminals out to be victims.

Now, #DustinHiggs has been executed on the birthday of Martin Luther King, jr.

Justice Sotomayor’s dissent can be read in its entirety here:

this INNOCENT black man has been executed for a crime he committed over TWENTY YEARS AGO!!!!! he was killed by a lethal injection at 9:27 pm on thursday. BRANDON BERNARD PLEASE SAY HIS NAME!!!!!!!! #BrandonBernard